Lasers With No Compromises Made - Hisense 100L9G-CINE 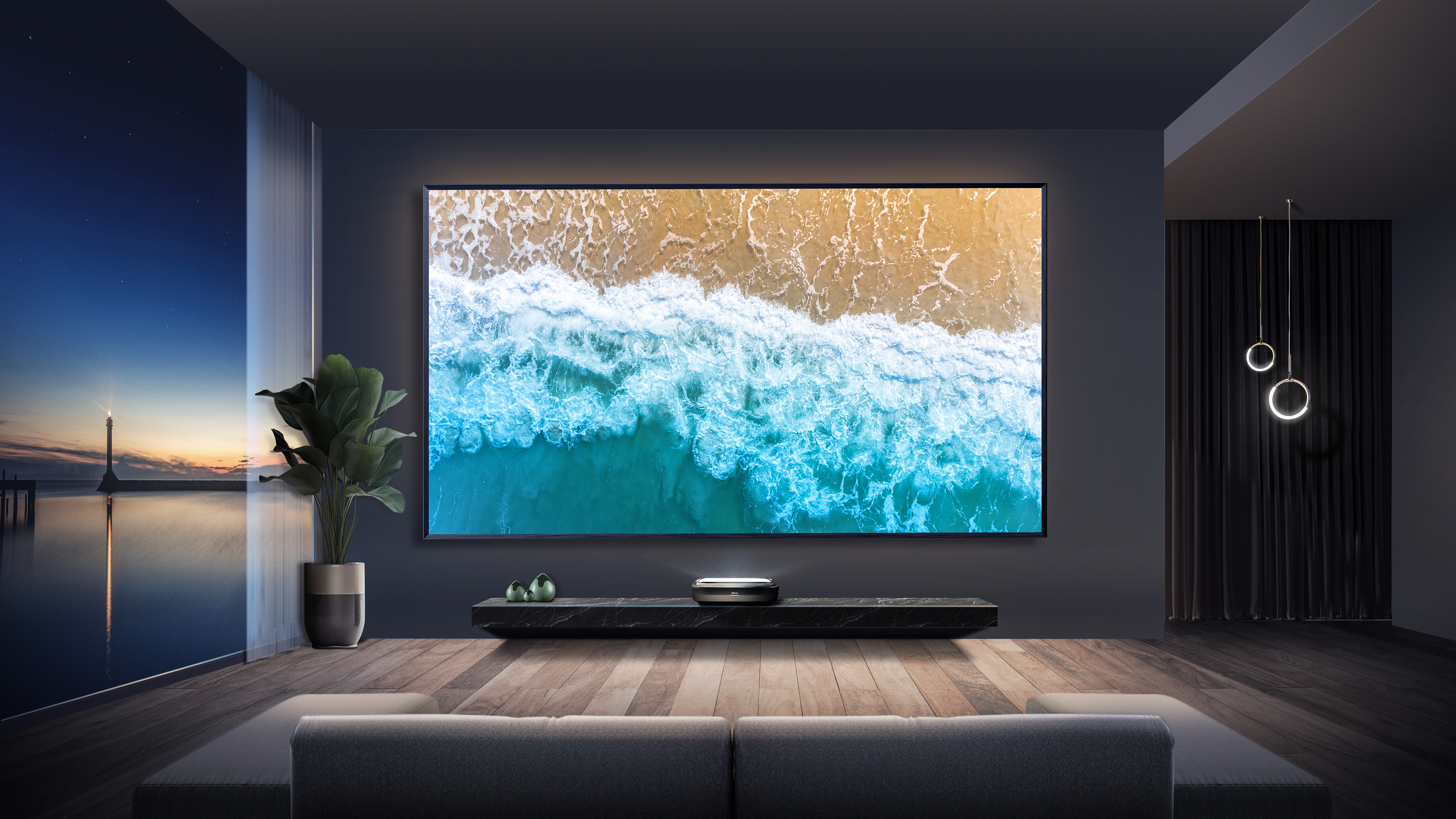 A Laser That Doesn't Go "Phew"

Projectors have been around for some time. We have seen them mounted to the ceiling or on a rolling stand. However, projectors have come a long way from those viewing situations. With the Hisense 100L9G-CINE, the first item you will notice is the projector being so close to the wall. The ultra-short throw projection capability makes laser TV a different category than LEDs or LCDs. Paired with the Ambient Light Rejecting (ALR) Cinema Screen, it gives you the option of having the biggest screen possible without breaking the bank. Fortunately, there were no harmful lasers used in this product. Your walls will be safe.

Let There Be Light!

You would think that an ultra-short throw projection might not be bright, for 4K quality. Hisense can assure you that their projection TV is bright - 3000 Lumens in fact! With 25,000 hours of life, those high-level Lumens can deliver constant quality of your liking. Don't let the screen assembly deter you from getting a big screen in your media room or entertainment center! The work will be worth the killer picture quality. Combined with the ALR Cinema Screen, you don't have to dim the lights to get that amazing picture quality. In a small frame, you don't have to sacrifice sound quality over picture quality.

Built-In Speakers Doesn't Have To Be Puny

In fact, the L9G has upgraded those tiny speakers found in your last TV. A 40W built-in system with Dolby Atmos can be found at the back of the projector. Meaning, you will hear the sounds better than your walls bouncing it to you. If that doesn't work for you, the L9G is WiSA Ready. So, you can hook up a wireless surround sound system for your desired results. There is high-speed HDMI with eARC support, as well. eARC capability allows for full pass-thru of audio to your existing surround sound system. This projector TV is not an ordinary projector found in lecture halls.

No Sacrifice In Picture Quality Here

Hisense doesn't play around, when it comes to picture quality. As mentioned, the ALR (Ambient Light Rejecting) Cinema Screen gives you great quality without having to turn off all the lights. MEMC (Motion Estimation, Motion Compensation) technology is in the 100L9G-CINE. The L9G's microsecond-level processor gives you motion and response rates that is faster than OLED. Great picture quality paired with fast motion rates means you will not miss a moment of action! Buttery-smooth images gives you the picture quality you deserve.

The L9G has Built-in Wi-Fi, Bluetooth, Google Assistant, Works with Alexa, and Control4 certified that's integrated with your smart home ecosystem to create automations freely and without restrictions, as one sees fit. The L9G also features Eye Safety that has a proximity sensor to turn off the laser when something gets too close, the projector takes eye safety seriously. As a bonus it's a great feature for deterring little kids from touching the laser console.